5 Favourite Things to Do in New York City

The big apple. The city that never sleeps.  Gotham.

Iconic New York City is the subject of films, songs, novels, and yes, comics. It’s a city to which I return every few years for there is always more to explore. Five trips to New York and I still find more new things than I have time to explore. Every neighbourhood, almost every street, is special for one reason or another.

This article is not geared for your standard first trip to New York City. It’s about things that will make your first trip, or subsequent trips special in unique ways. Here I give you five of my favourite things to do in New York City. Straus Park is in the neighbourhood of my Big Apple greeter. It honours Isidor Straus, US congressman and co-owner of Macy’s, and his wife Ida who perished in the wreck of the Titanic. Ida refused to go with the women into the lifeboats without her husband; Isidor refused to get in a lifeboat ahead of women and children and before the other men. They were last seen arm in arm on the deck of the Titanic as the ship was going down.

Big Apple Greeters is the original volunteer greeter programme that spawned many more such programmes around the world. This was my starting point for my latest visit to New York. The fact that it’s free certainly makes it attractive but more importantly, it’s about getting a personal tour of New York City from a local who is taking you around simply for the love of their hometown.

I was lucky enough to meet up with Tony who also happens to be a licensed tour guide for the city. He does the volunteer gig because it gives him the freedom to show off his city in his own way. Tony and I explored the Upper West Side of Manhattan – his neighbourhood. From the diner made famous on the television show Seinfeld to the Cathedral of Saint John the Divine, we walked and took in the highlights of his area. There were three of us on the tour. We enjoyed prosciutto and an olive oil tasting, starters at Batali’s Otto restaurant and our main dish at his Lupa restaurant.

A taste of Italy in Greenwich Village

Naturally, having been to New York before, I have spent time in the Village. However, I saw the Village totally anew on the  Official Mario Batali™ Greenwich Village Food Tour.

On the tour we learned about the history of Italian immigration to New York through specialty food shops, Italian restaurants and the stories of our guide, Simona. Teaming up with Batali, a celebrity chef, Italian food, history, and culture expert, writer, and restaurateur, Walks of New York announced this new tour this fall. With tastings in three restaurants and two shops it was a good thing that I had only eaten a very light breakfast. 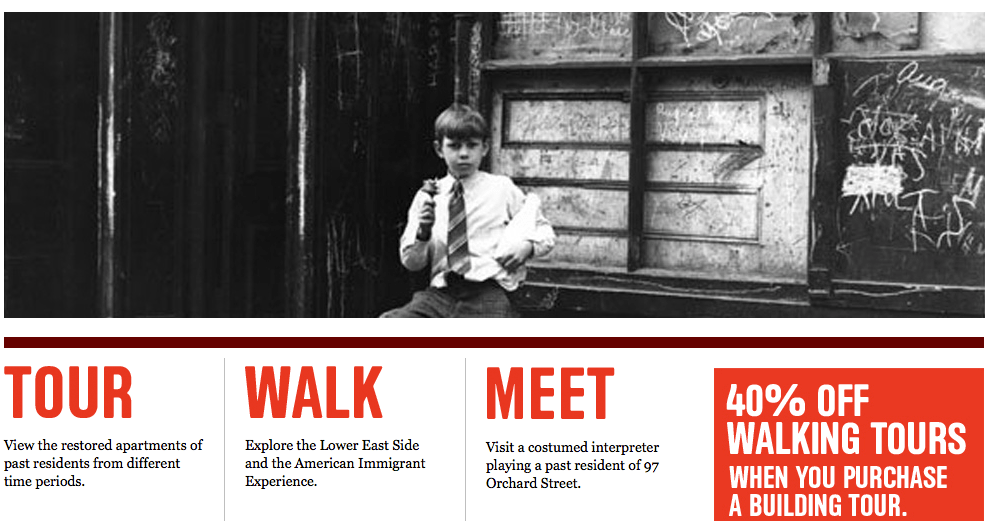 The Tenement Museum brings the history of immigration to life through a wide variety of tours through an actual tenement and along the streets of the Lower East Side.

The Tenement Museum reveals a social history of New York

Located on the Lower East Side, the Tenement Museum reveals the daily life of the poorest of immigrants who came to New York in the late 19th and early 20th centuries by taking people on tours of an actual tenement. The tour is an interactive experience which not only helps people understand the immigrant life but, more importantly, involves the participants in the type of questioning a historian undertakes. Too often, tours present history as a series of unequivocal facts whereas there is usually much ambiguity. Certainly, the “why” of history is open to a variety of possibilities and interpretations. The Tenement Museum balances fact and conjecture well and is great for all ages. 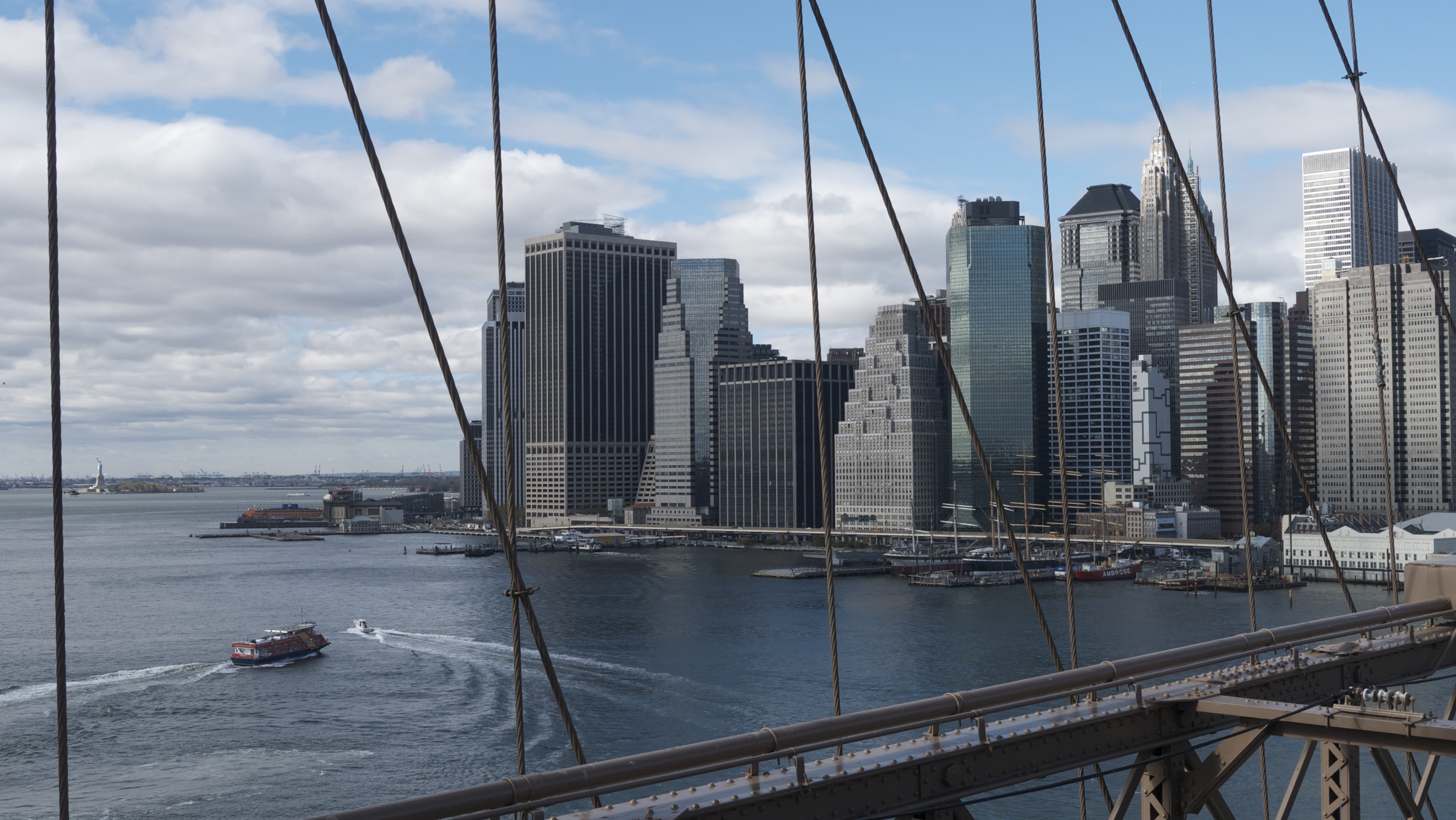 Walking the Brooklyn Bridge on a nice day offers you a new perspective on the city.

The Brooklyn Bridge is accessed from the Lower East Side of Manhattan and, therefore, is easy to reach after your visit to the Tenement Museum.

I had no idea how busy the bridge would be. Despite it being a weekday, the walking path along the bridge was packed with people. However, it’s worth the trek for the views of the city that it offers. A hybrid cable-stayed/suspension bridge, it was opened in 1883. The Brooklyn Bridge is designated as a National Historic Landmark by the National Park Service and is really quite beautiful. It’s worth the walk. Musician on the High Line (and yes, I made a contribution to his trumpet case).

Take a walk on the High Line

A much more current walk in New York City is the High Line. Built along the defunct New York City Railroad on the west side of Manhattan, the High Line is an elevated, linear park that meanders for about 1.5 miles (2.3km). A wonderful escape in a busy city, it runs from Gansevoort Street to West 34th Street with many access points along the way. It features natural flora and street musicians, a restaurant at the Gansevoort end and murals along the way.

As I said at the beginning of this article, there is no end of things to do in New York City.

What are your favourites?

Previous post Best Cities in the World to Spend Christmas 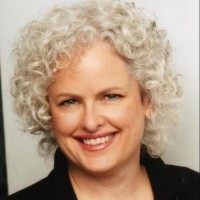 About the Author Janice Waugh

Janice Waugh is author of The Solo Traveler’s Handbook, publisher of Solo Traveler, the blog for those who travel alone and moderator of the Solo Travel Society on Facebook. She has spoken internationally on solo travel and on travel blogging. She has been quoted in many media outlets including the Toronto Star, CNN, the Oprah Blog, the Washington Post, Chicago Tribune, LA Times and USA Today. Janice is publisher of The Traveler's Handbooks series and co-founder of the Global Bloggers Network.
Twitter

Sunset Kisses for the Win: 4 Spots to Sneak an Instagram-worthy Smooch