From Mad Men-styled retro spots to sleek boutiques to a new lodging run by First Nations people, there are no shortages of stylish spots to lay down your head in Vancouver. Here’s a look at some of the options.

FAIRMONT PACIFIC RIM The lobby in this five-star rated property sets the tone with white marble and a long, flickering fireplace that has a nice effect on those cool Vancouver nights. The rooms are done in pretty shades of beige and brown, with the smallest measuring in at a very nice 400 square feet. The Lobby lounge and Raw Bar is definitely a spot for society folks to strut their stuff. There’s also live music seven days a week. The rooftop pool features swanky cabanas and a sleek, sophisticated look that feels more Miami than mainland British Columbia. Not enough? The Fairmont Willow Stream spas are consistently rated some of the best in Canada. The hotel is in the heart of downtown and just steps from the water and the convention centre. 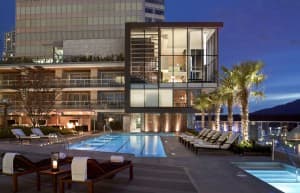 The pool at the Fairmont Pacific Rim hotel in Vancouver is sleek and sexy.

SKWACHAYS This is a downtown hotel that’s managed by First Nations people, with profits going to local natives. There are 18 rooms, plus another 24 used by native artists-in-residence. You’ll find creative and colourful native motifs in the rooms, all done up by local artists. 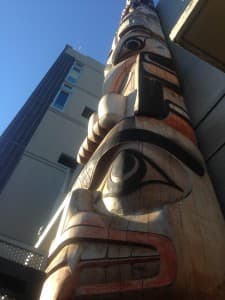 Skwachays Lodge is run by First Nations people and has a wonderful atmosphere.

Each floor is dedicated to an animal that’s sacred to local natives, such as eagles or bears. My room had a nice balcony with a totem pole rising into the sky. There’s a small breakfast area and they also serve local craft beer (but you’ll have to wait until after breakfast). On top of all that, you’re right in the middle of the Chinatown/Gastown action, with great shopping, food and bars galore.

LODEN HOTEL This is one of Vancouver’s first modern boutique properties. And still one of the best. When I last stayed I was given a small package of tiny, colourful Buddha figures that were adorable. Expect chic, slightly minimalist furnishings with lots of marble in the bathroom and a definite European feel. 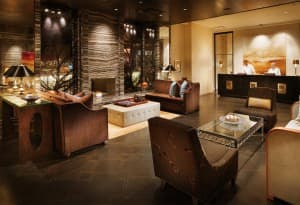 The lobby at the Loden Hotel is one of the coolest in the city. It’s a very chic property close to the waterfront.

The floor-to-ceiling windows are a nice touch, too. The onsite restaurant, Tableau Bar Bistro, serves lovely roast duck and a delicious ravioli with lemon and ricotta. They also have colourfully decorated London cab cars to whisk you about. You’re only a couple short blocks from the waterfront at Coal Harbour, so it’s a great location. They have free Cruiser Bikes for that perfect spin around Stanley Park, too.

THE BURRARD A former motor lodge that’s been converted into a frisky, funky spot that feels like Palm Springs or South Beach. Rooms are fairly small and bathrooms smaller, so it might not be a place to take the kids or for couples with lots of bags on a long-term stay. Lots of fun, with a slick, 60’s-feeling courtyard garden to boot. 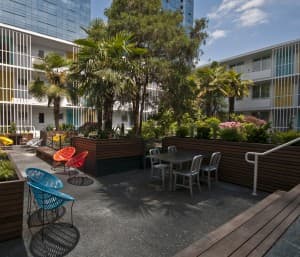 The Burrard has a great retro vibe and is quite affordable. A great place to stay in Vancouver.

They offer free Brooklyn Cruiser bikes you can use. Rooms have sleek Nespresso coffee machines with free coffee. (Sadly, Nespresso spokesperson and actress Penelope Cruz doesn’t arrive and make your espresso for you). They also offer free calls within North America, so it’s a good time to chat with your cousin George in Penticton or Peterborough.

ROSEWOOD HOTEL GEORGIA This five-star gem is one of my favourites in the city. This is a property dating back to 1927 that was given a massive remake in 2011. You’ll find a lovely mix of new and old, with dozens of paintings by Canadian artists sprinkled around the public areas and a solid, handsome lobby with dark, polished wood and old-style clock and elevators. Rooms are good-sized, with all the swanky extras you’d expect from a luxury property, including espresso machines and a Bose docking station. 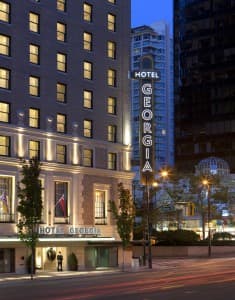 The Rosewood Hotel Georgia is both beautiful and romantic. One of Vancouver’s best hotels, for sure.

My shower was big enough for a Calgary Flames scrimmage, and the downtown location is ideal; just steps from top shops and directly across the road from the Vancouver Art Gallery. The on-site restaurant Hawksworth is one of the top dining spots in Canada, while the Bel Café is great for pastries and cappuccino. You also can try the new bar, Prohibition.

THE SYLVIA A legendary property in the English Bay area, with tons of history and nice rooms. You’re literally 19 steps from the beach (yes, someone counted), which is one of Vancouver’s best. Many rooms have been renovated of late and there’s a wide variety of styles and shapes and sizes. There’s an on-site restaurant on the ground floor, and a fun, homey atmosphere. Which makes sense when you consider some workers have been with the hotel for 40 years. 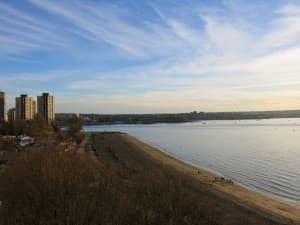 Some rooms at the Sylvia Hotel have fine views of English Bay and the beach. It’s a great and affordable property in Vancouver.

The Sylvia is the setting for the series of books about a cat named “Mr. Got to Go.” The feline was famous for making its way around the hotel a few decades back, prompting the general manager to suggest one day that “that cat has got to go.” Trivia bonus: Greg Keelor of Blue Rodeo is said to have been staying in one of the ocean-view suites when he penned the song “English Bay.”