7 Dishes You Have to Try in Scotland

When it comes to cuisine, there are quite a few similarities between Scotland and the rest of the British Isles. However, there are also numerous Scottish dishes that stand out like a thistle in the middle of a well-manicured lawn. Since no trip to Scotland would be complete without sampling a bit of the local fare, this article with highlight a few dishes you should taste during your visit. 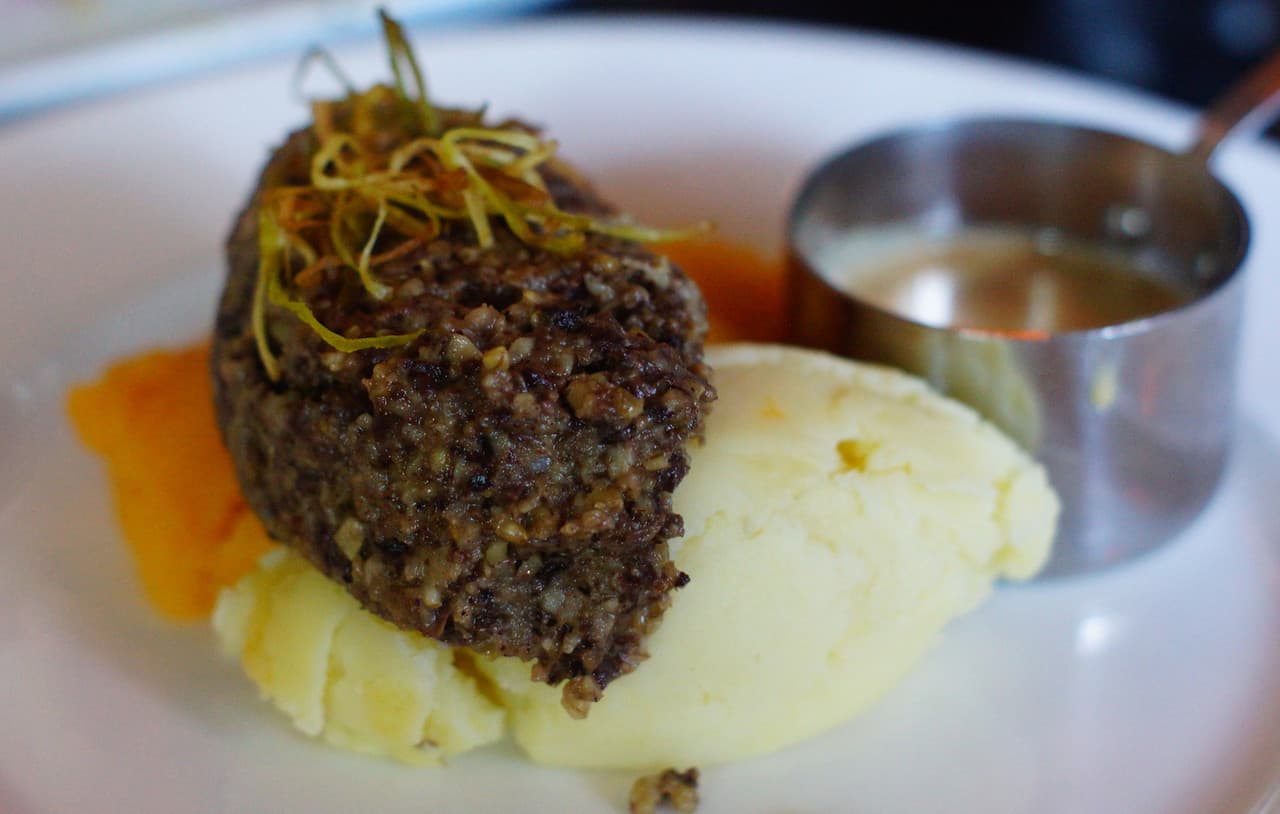 1) Haggis with neeps and tatties

Being one of the more adventurous foods found in Scotland, haggis is a polarizing dish for many travellers due to its unconventional ingredients.

It is a pudding made from minced sheep’s heart, liver and lungs, with some onion, oatmeal and spices thrown in for good measure. The pudding is encased in a sheep’s stomach, which is then boiled. As a finishing touch, the haggis is served with neeps (turnip) and tatties (mashed potatoes), which completes this iconic Scottish meal.

Those brave enough to try this national dish will be rewarded with a flavourful, savoury meal that is often far better tasting than one is initially expecting.

A full Scottish breakfast is the perfect way to begin your day, whether you are getting ready to go trekking in the Scottish Highlands or you are setting out on a shopping expedition along Edinburgh‘s Princes Street.

While it contains elements consistent with other breakfasts served around the British Isles (bacon, eggs, sausage), the Scottish variant usually comes with black pudding, tattie scones, oatcakes and occasionally, haggis.

Despite what you might think, black pudding is not a food that you’ll be consuming for dessert when you are in Scotland.

Commonly served at breakfast (but also at other times of the day), it is a sausage made from onions, oatmeal, pork fat and pig blood. Feeling squeamish? You shouldn’t, as its rich, full-bodied taste makes it the perfect side for many meals you’ll be enjoying during your trip.

There’s no quick serve food that defines the British Isles quite like the meat pie. From bakeries to gas stations, these savory pastries will banish your hunger in ten bites or less.

The Scotch version of this toasty pastry is filled with minced mutton (as well as other meats) that will warm your core nicely wherever you happen to find yourself on your Scottish adventure.

Baked with a double crust, Scotch pies also employ a ring at the top of the pie that allows gravy, baked beans, or mashed potatoes to be added to the top, making it one of the best value meals for those that are on a strict budget while travelling.

After a long night taking in the best pubs and clubs that Glasgow or Edinburgh have to offer, you’ll likely be craving some comfort food to soften the blow of the hangover that is surely looming.

Late night chip shops will often serve a tempting treat known as deep-fried pizza – not the best sounding food when it comes to cardiovascular health, but hey, you only live once.

Using a deep fryer instead of an oven to cook their pizza, they dip half a pre-made store pizza in batter and proceed to use boiling hot grease to cook it to a sinfully delicious crisp.

Some vendors will apply toppings like brown sauce, malt vinegar and various seasonings to finish off a meal that you will thoroughly enjoy, even if it ends up shaving a few days off the end of your life.

What if you want something sweet instead of savory? Fear not, as the Scots have expanded their deep frying game to include Mars Bars as well.

Dipped in batter and fried in a bath of hot oil, the melted chocolate, caramel and nougat will combine with its crispy exterior to create a snacking experience that will forever change the way you look at plain, unaltered chocolate bars.

If you’d rather track down a Scottish sweet that doesn’t involve massive amounts of grease in its creation, then finding some tablet to nibble on should be your priority.

Made from sugar, condensed milk and butter, tablet is similar to fudge, but is grainier and more brittle than its softer cousin.

Previous post Northern Lights in Scandinavia: Where To Go And What You Should Know

Canadians Choose Their Favourite Vacation Scents and Where to Find Them