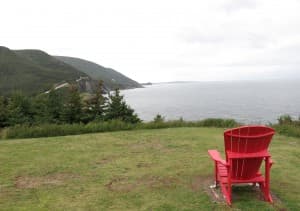 A perfect perch along the Cabot Trail in Cape Breton, Nova Scotia.

CAPE BRETON, NOVA SCOTIA – It’s that first glimpse of a rising green headland flanked by the deep blue sea. It’s the sound of a late-night jam session at the Red Shoe Pub in Mabou. And it’s the silence and the wind and sun on your face when you pull over at any of dozens of stops on this glorious, triumphant bit of world-beating road.

Driving in Cape Breton is something I’ve had the pleasure of doing on three separate occasions in the past few years. Each time adds a different layer of cool, restful green to my collective life’s painting, a reminder of something simpler and bolder and more colourful and somehow with more gravitas than I find anywhere in Canada outside the Rockies, which might be almost too overpowering to truly appreciate.

Cape Breton isn’t as rugged as Banff or Jasper, but it’s a devilishly handsome and utterly delightful part of a great province and a great country. You’ll also find a huge variety of experiences; everything from a Scottish-style distillery to museums that celebrate Acadian music and two of the finest golf courses in Canada, with a third on the way that might just top anything else Canada – or even the U.S. – have to offer.

Coming over the not-so-attractive Canso Causeway takes you mainland Nova Scotia to Cape Breton Island. If you haven’t finalized all your plans, and even if you have, stop in at the visitor centre just over the bridge and pick up an old-fashioned map or two. And be sure to talk with the folks who work there. Even if you don’t need restaurant or hotel tips, they’ll charm the ever-living pants off you with their down-home style and well wishes and sheer gratitude that you’ve taken the time to visit their corner of the world. 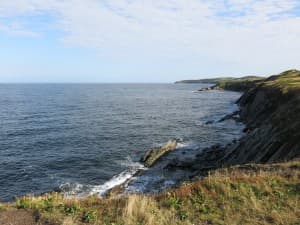 You’ll find marvellous views at all sorts of “look-offs” on the coast of Cape Breton.

Cape Breton experts say the views are best if you turn left once you’ve crossed the bridge and head up the north/west coast of the island, heading towards Long Point and Judique. Instead of garish billboards for the nearest chain hotel you’ll find small, hand-painted signs for Mom and Pop motels, as well as signs for streets such as Mildred’s Lane.

Rather than look-outs or vista points, the folks in Cape Breton call the roadside areas where you can pull over for a nice view a “look-off.” As in, you look off in the distance. I like the dreamy sound of the phrase, which somehow makes me think of simpler times without Apple watches or even cassette tape decks in the car.

You’ll find signs in Gaelic as you make your way along the coast in what’s called the Ceilidh Trail. At the village of Long Point you’ll find a sign telling you the Gaelic name is An Rubha Fada, which sounds so much more romantic than Long Point.

Stop in the town of Judique for a look at the fine and entertaining Celtic Music Centre, where you’ll learn how the local fiddle music was (barely) kept alive and also find everything from Hawaiian guitars to old-time record players, not to mention displays on famous musical names such as MacMaster and Rankin.

It’s not terribly well marked, but if you find the sign for Mabou Beach provincial park be sure to take it, as the road leads to a beautiful beach that offers up great views of the distant hills. If there are more than eight or ten people within shouting distance it’s a crowded day.

The town of Mabou is famous for its seaside setting and the wonderful Red Shoe Pub, which is owned by members of the Rankin family. The last time I was there I was treated to a magical show from a local fiddler and guitar player.

You’ll also find music on offer on many a night at the Glenora Distillery up the road, which not only makes a single-malt liquor but has a fine restaurant and lovely rooms in a deep, wooden glen with a tumbling river dashing through the grounds. 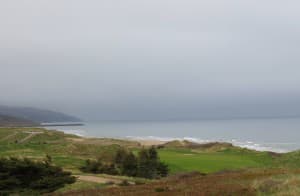 Cabot Links is one of the top golfing draws in North America. The new Cabot Cliffs course next door might be even better.

Just up the road is Inverness, where you’ll find the utterly sensational Cabot Links golf course and the soon-to-open Cabot Cliffs. Cabot Links has transformed the area from a tiny backwater into a thriving tourist destination. Dozens of private planes carrying fanatic golfers from New York and Boston and Toronto and Montreal arrive every summer on Cape Breton just so they can play Cabot Links, the only true links course in North America.

The ocean views are sensational, but it’s the golfing challenge I love most; the sometimes fierce winds that can turn a 275-yard monster drive into a 125-yard weakling and the pot bunkers and the gnarly, waving fescue and the imaginative play that a true links course forces you into. The new Cabot Cliffs course, set for a soft opening in July, looks like it will be even better. The final three holes, in particular, feature forced carries over yawning chasms and pounding ocean surf on a series of bluffs high above the Gulf of St. Lawrence. If they play as well as they look, they might be the finest finishing holes in North America.

The rooms and the food at Cabot Links are equally tempting, making this a truly magnificent golf destination.

The Cabot Trail doesn’t actually start until you reach the town of Margaree Forks, which is inland. But you’ll soon be climbing those oft-photographed roads that rise and fall along the very edge of the rugged mountains. Pull over at one of the look-offs, breathe in the sea air and soak up the view of a stunning, timeless coastline.
The main road on the far eastern end of the island is mostly inland. But if you instead take White Point Road along the coast you’ll find amazingly empty beaches and homes perched near dramatic, rocky cliffs pounded by ceaseless waves. It’s one of my favourite parts of the island, as is the little village of Neil’s Harbour. 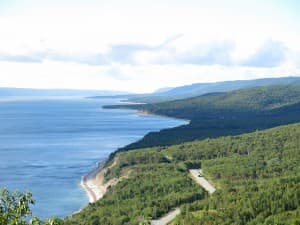 The coast of Cape Breton south of Ingonish is a lovely spot for a drive.

Just outside of Ingonish, Keltic Lodge is one of Canada’s most historic properties; an old-style spot that sits on the most perfect promontory and commands lovely views of the water. It’s a tad dated but has tons of charm and a nice lounge for sipping a drink and listening to local entertainment.

Next door is the marvellous Highlands Links golf course, a design by legendary architect Stanley Thompson. I’ve only played it once, but I went back a year or two ago and toured the property in a golf cart. I found it far more intriguing than I remembered from my first trip some 15 or 16 years ago, with fantastically shaped holes that march through wetlands and highlands and a supremely classic feel.
The drive from Ingonish down towards North Shore is magnificent. Be sure to get out of your car at Cape Smokey Provincial Park to admire the views down the coast.

Baddeck is home to the Alexander Graham Bell National Historic Site, where you’ll learn not only about his work with the telephone but also how he helped create Canada’s first powered flight and the world’s fastest boat. It’s a pretty town on a fine and handsome lake, with good coffee and tea shops and honest, unpretentious food.
As much as there are great towns and museums and hotels along the way, Cape Breton is a place where you need to improvise. Some of my favourite memories are from odd turns I took, checking out Mabou Beach and the strangely under-kept Cabot Monument, as well as the village of Iona, south of Baddeck.