Chicago’s Restaurant Scene is on the Rise

This may be the quintessential American city. But Curtis Duffy isn’t your typical chef.

Duffy is the talent behind the buzzworthy Chicago restaurant called Grace, which recently was awarded a third Michelin star. He’s also a man who has overcome almost unbelievable obstacles. 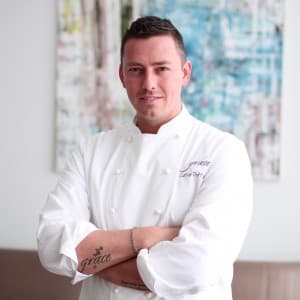 CURTIS DUFFY PHOTO COURTESY CHOOSE CHICAGO
He grew up in a fairly poor family in Colorado and Ohio. He had some minor run-ins with the law but was intrigued by cooking after a home economics teacher showed him how to make that classic standby: English Muffin pizza. When he was 19, his father took his mother hostage and shot and killed her, then turned the gun on himself.
Duffy threw himself into the world of restaurants and worked his way to Chicago, where he toiled beside all-star chef Grant Achatz. He was with Achatz at Alinea, often voted top restaurant in the U.S., and then a couple years ago opened Grace.
It’s a flat-rate dinner that will set you back around $250 Canadian. But it’s a once-in-a-lifetime experience. When I was there, the appetizers were served inside the hollowed-out trunk of a cork tree, with a few drop of Meyer lemon custard inside a scooped out lemon, a thin bit of Iberico ham on a toothpick and a spice-crusted, dehydrated date inside the log.
And then it got interesting. There was poached king crab served under a brittle, glassy bit of neutral sugar and bits of flower petals that looked like a swarm of bees; all delicate patterns and specks of tiny beauty.
The Robb Report a couple years ago named Grace the world’s best restaurant, but many folks swear Alinea is even better.
The James Beard awards for best restaurants are usually held in New York. But, in a testament to the power of the food scene in the city of broad shoulders, they were held this year in Chicago. Windy City restaurants came away with 19 awards, including chef Donnie Madia for outstanding restaurateur. 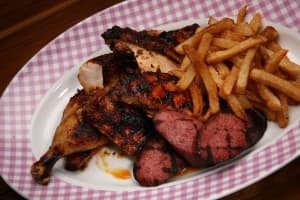 Try the chicken and fries at Publican, a lively and popular spot in Chicago.

Madia runs the much heralded Blackbird, as well as the fun and lively and moderately priced Publican, where you’ll find killer frites, as well as delicacies such as Kentucky ham, Iowa prosciutto and sustainable shrimp from Indiana. It’s not all meat all the time, but it’s close.
Beef is definitely the main thing at Al’s Beef, a super-casual sandwich place where you line up at the counter and come away with greasy, wonderful beef sandwiches.
Chicago style dogs are big, but don’t expect ketchup. A Chicago hot dog traditionally consists of an all-beef dog with a crisp casing, topped with mustard, onions, peppers and relish or a pickle spear. A request for ketchup is likely to be denied by some purists. Chicago dog fans swear by Hot Doug’s (partly for the meat and partly for the duck fat fries) as well as Gene and Jude’s or Superdawg. 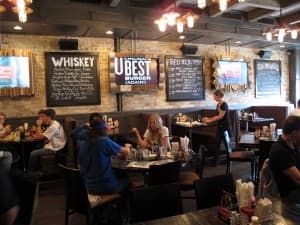 Rockit is a fun dining spot near Wrigley Field with great burgers.

Rockit, near the Chicago Cubs’ home at venerated Wrigley Field, is a fun and welcoming spot for a casual meal. The Rockit burger is made with wagyu kobe beef, melted brie, medjool date aioli and fried shallots on a red onion brioche bun. Sinfully sensational. Oh, and it comes with truffle fries.
Deep dish pizza seems to have fallen out of favour of late in Canada, with more folks opting for quick-fired, thin-crust Neopolitan style. Still, there are fans who line up for the offerings at Giordano’s or Lou Malnati’s.
Another old-time spot with charm to spare is Twin Anchors, a restaurant/bar north of downtown that’s been serving great ribs since 1932. Frank Sinatra was such a fan of the food, and of course the drinks, that he once had a payphone installed at a booth in the back.
Folks interested in learning a bit of Chicago history as they eat their way around should look up Liz Garibay, who runs a tour called Tales, Taverns and Towns. 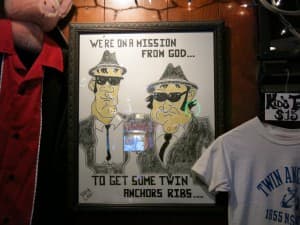 The Blues Brothers were big fans of the ribs at Twin Anchors in Chicago.

“I’ve been dismayed for so long that people my age don’t know about history,” she said, explaining why she started her company. “I think sitting in a bar and sharing a beer is one of our sacred moments. People are so friendly here and saloons play a major role in our city.”
Close by is the Old Town Ale House, where you’ll find a series of risqué paintings that roast politicians and elected officials, including one showing a naked Sarah Palin standing on a polar bear skin rug with a semiautomatic rifle in her hand. You’ll also find likenesses of John Belushi, Gilda Radner and Martin Short on the wall, as the bar is across the street from Second City.
Movie critic Roger Ebert was great friends with owner. You’ll find a photo of Ebert outside the bar, along with his comments that the Ale House is “The Best Bar in the World That I Know About.”

Next post Best Beaches to Visit in North America in 2015

5 Things to Do in Niagara Falls This Winter