Seven great things to do in surprising Victoria B.C.

Tea at the Empress Hotel. A Parliament building lit up with thousands of glowing lights. And riotous flowers at Butchart Gardens.

Victoria B.C. has dined out for years on a trio of attractions that would make almost any city in the world, pardon the pun, green with envy. You can still find your grandmother’s Victoria if you like, and there’s nothing wrong with tea and flowers and pretty buildings.

But there’s a new groove in town, sparked by youthful, savvy marketers and hip coffee shops with baristas sporting that perfect facial hair and tattoos in places their parents would rather not know about. So, without further adieu, here are some seven things to see and do in a city that might surprise you. 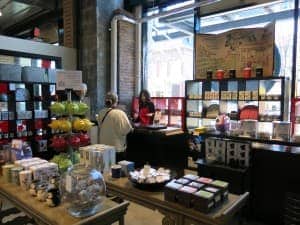 Great home decor and kitchen items can be found at the Victoria Public Market, as well as terrific food. 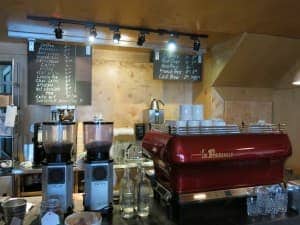 The Parsonage Cafe is a buzzy, fun spot for coffee and sandwiches in the Fernwood area of Victoria.

3. LOCAL BEANS The Parsonage Café, where they serve locally roasted, award-winning Fernwood Coffee, might be the best coffee spot in a province filled with them. They’ve won awards for their locally roasted beans, and the baristas weigh their beans and brood over their coffee like a mathematician poring over a rocket launcher. The menu is based on local products, so it’s all fresh. This is a delightful part of town, with cool, brick buildings and funky restaurants and shops, some of them funded by community micro financing. The Fernwood Inn was considered something of a dive a while back, but they now have good food and music most nights and it’s become a family gathering spot with great micro-brews. The area also includes a Polish bakery, a Montreal bagel shop and a wonderful ice cream place called Cold Comforts, right next to the Parsonage Café.

4. TAKE A BIKE Given the mild winters (and considerably less rain than nearby Vancouver), it’s only natural that there are bike tours. And given the food scene, why not marry the two together? The folks at The Pedaler will take you on a four-hour ride and let you feast on all sorts of goodies; sweet cakes and macarons and more. The Beans and Bites tour takes in both food and coffee spots such as Fernwood. You also can do a beer/local brewery tour by bike called the “Hoppy Hour” Ride. Just watch your intake. 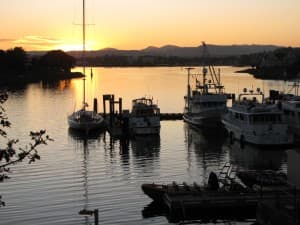 Take a boat tour of Victoria’s fabulous harbour, or enjoy the view from a nearby restaurant or bar. Great sunsets, too!

5. TAKE A BOAT They have adorable ferry boats criss-crossing the harbour once spring arrives. You also can take a 45-minute tour with the folks at Victoria Harbour Ferry and check out Fisherman’s Village and the lovely, floating homes in the bay. Fun people and a good education at the same time 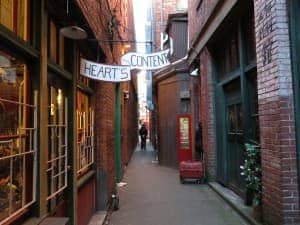 6. SHOPPING SENSATIONS Fan Tan Alley is billed as the narrowest street in Canada, and it’s got to be darn close; a tiny affair barely wide enough for a couple folks to walk through (depending on what you had for lunch). Stop in at Whirled Arts for colourful wool socks and scarves, carved Buddhas and beautiful glass jewelry. Nearby Paboom on Store Street sells sleek household goods, including plush pillows and fun greeting cards. 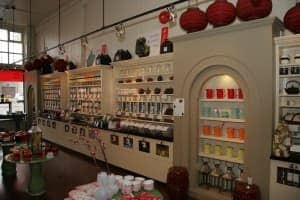 Silk Road is a wonderful spot to try exotic teas, or chocolates made everywhere from Victoria to South America.

7. TEA AND CHOCOLATE Okay, you’ve done the hipster stuff. Now you can have tea. But instead of sipping out of china cups at high tea at the Empress, how about instead trying a tea and chocolate pairing at Silk Road? You might try a palate-cleansing Korean mulberry tea or perhaps Japanese sour cherry green tea. They have chocolate from all over the world, including central and South America and locally produced Sirene chocolates. When I was there I was told to “let the chocolate melt in your mouth and get your spit going.” Like I said, not your grandmother’s Victoria.

WHAT’S YOUR FAVOURITE THING TO DO IN VICTORIA?

Next post Ways to Blend in with the London Locals